Alright, so what’s a gun blog if you can’t post funny stuff every now and then?

Anyone that knows me (which out of my readers, I think is 1 person), would know that I am NOT a morning person. I hate waking up. I hate getting out of my cozy, warm bed. Most of all, I hate the sound of my alarm. Like seriously, it has got to be THE MOST annoying noise on the planet.

Well, it looks like there are other morning-haters out there besides me and they came up with the perfect alarm clock.

I mean, really. Is there a better way to take out your morning-anger on your alarm clock? I think not. Not to mention, you get some target practice in before you’re up and ready for the day. Sure, it’s probably for kids 12 and under but who cares. It’s genius.

If you want one, there is a Groupon special for the next 5 days! Did I mention last week was my birthday? 😉 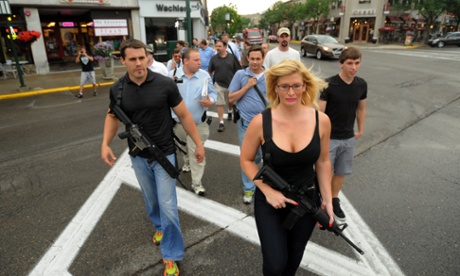 In 2012, Michigan gun enthusiasts rallied in support of 18-year-old Sean Michael Combs, of Troy, who was arrested in Birmingham while carrying a rifle. Photograph: David Guralnick/AP

Detroit police chief James Craig – nicknamed “Hollywood” for his years spent in the LAPD and his seeming love of being in front of the camera – has repeatedly called on “good” and “law-abiding” Detroiters to arm themselves against criminals in the city.

His words have not fallen on deaf ears.

Patricia Champion, a 63-year-old lifelong Detroiter, a grandmother and retired educator, decided to get her concealed pistol license – a CPL – two years ago after her son said he was increasingly worried for her safety. Champion, a resident…

Well as if it isn’t bad enough that the democrats want to disarm law-abiding citizens, now they want to ban the purchase of body armor.

And then you say, “Oh! But look! There are exceptions to this bill!” Don’t get ahead of yourself. Those ‘exceptions’ only apply to our fabulous government. And don’t even think about violating this new bill, otherwise you will get fined and can be imprisoned up to 10 years.

Seriously?! You don’t see ANYTHING wrong with our federal government deciding how and IF we can protect ourselves? This should be raising some MAJOR red flags. Can anyone give me 3 good reasons as to why our government should have ANY say in whether or not I can own body armor?

Let’s also take a look at the “meets or exceeds” statement above. This guy hits the nail on the head.

According to Mechanicsville, South Carolina’s local media reports, two armed men broke into a home occupied by two females, an 11 year old boy, and an adult male. The armed men physically assaulted the two women and struck the young boy over the head with their gun. One of the suspects also shot and killed the family dog.

Woken up by the commotion, the adult male homeowner was able to access a gun and started firing at the two intruders. The suspects fled the scene. One was found dead near the property and the other was arrested soon after the disturbance.

According the Carolina Live, the surviving suspect is charged with Burglary to the First Degree, three accounts of Assault and Battery Second Degree, and Criminal Conspiracy. Honestly, I think he should be charged with murder as well.

The homeowner will not be facing any charges.

Yet again, a good guy with a gun saves the lives of loved ones. This just goes to show, guns are not evil. It is the people who are carrying them. If put in the exact situation, wouldn’t you want a gun to save your life as well as your family’s?

Alright guys. I know I’ve been way behind on my postings, but after this next weekend, I should be done with my traveling until November.

Anyways, I found this video on BuzzFeed and I love it! It goes to show that people are against guns because they’ve never shot one and never tried to understand them.

We forecast this trend would intensify and it is doing just that. And with no credible, objective national mechanism to track these incidents, it’s virtually impossible to fully understand the depth of the issue.

By Gerald Celente of The Trends Journal via LewRockwell.com

KINGSTON, NY, 13 August — The tragic shooting death of an unarmed African-American teen by a policeman in a St. Louis suburb has escalated into national outrage over what is being viewed as a racial incident, fueled by an apparent history of racial tensions between the largely African-American community and local police.

“Hands up, don’t shoot” has become the rally cry of protesters. Even President Barack Obama weighed in.  ”We should comfort each other and talk with one another in a way that heals, not in a way that wounds.”

” After battling authorities for more than a year, a Portsmouth, Virginia, man was handed a verdict of not guilty by a jury who determined that he did not, in fact, act recklessly when he fired a warning shot at officers who attempted to make forcible entry into his home, only to later discover that they had gone to the wrong house.

The incident, which happened last January, unfolded while Brandon Watson and his wife were watching late-night TV and heard noises coming from the back yard.

“ She said, ‘Oh my gosh, someone is in the backyard,’” Watson told reporters. “The noises got closer and then she heard the clicking of the backdoor handle.”

At that point Watson ran to grab his gun, which was legally owned.