Yup, you read that right! Our ever-so-economical president wants $1.1 BILLION to protect Americans from gun violence. $182 million of Obama’s request is to support the “Now Is The Time” gun safety initiative, which includes: 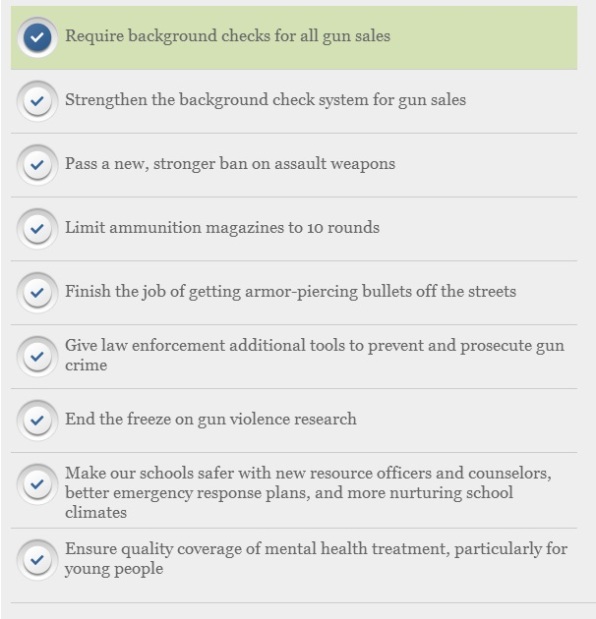 Let’s take a closer look at these so-called “gun safety initiatives”. First, background checks are already required for any legal purchase of a firearm. This isn’t how criminals are getting a hold of guns. It’s people like Leland Yee who are illegally trafficking guns into the country and placing them into the hands of very bad people. This will happen regardless of what our background check requirements are. Do you think Senator Yee and ‘Shrimp Boy’ performed background checks on any of the Muslim rebels they so willingly armed?

Passing a stronger ban on assault weapons. Look, I’ve already done an article on how Obama, Feinstein, and other anti-gun advocates are misusing terms in order to scare uniformed American citizens into supporting their agenda. He wants to pass stronger bans on guns in general and will do so by manipulating you into thinking a modern day sporting rifle is a military weapon. Which in turn makes a legal gun an ‘assault weapon’.

Banning magazines that hold more than 10 rounds. I also mentioned this briefly in my post about misuse of guns terms, and I will mention it again. Limiting the amount of rounds a magazine can hold WILL NOT prevent or stop gun violence. Statistics say that criminals on average only fire about 4 rounds, which is well under the 10 rounds held in a supposed ‘dangerous’ magazine. Not to mention, PoliceOne did a survey in which 96% said that a ban on standard capacity magazines would not reduce crime. And last but not least, just because you have a limit on the amount of rounds your magazine can carry, doesn’t mean a criminal won’t have another fully loaded magazine on his/her person. An experienced shooter can unload and reload like it’s second nature.

Get “armor-piercing bullets off the streets”. Oh how I love this one. What exactly is an ‘armor-piercing bullet’? Where can I buy them? If I go to a store and ask for a box of armor-piercing bullets, will the counter clerk know exactly what I’m talking about? Not really, because there is no such thing. It is yet another term that Obama uses to scare you along with his favorite phrase “police are being out-gunned on the streets”. Which I also showed to my readers is not true in previous posts. Basically what Obama is wanting to “get off the streets” are regular bullets. You know, bullets that actually have more than 100 grains of powder and not the rinky-dink ones you use to practice at a shooting range. So not only is he going after guns, he is going after ammunition.

Giving law enforcement additional tools to prevent and prosecute gun crime. Ok, like what Mr. Obama? Another $382.1 million has been requested by the Department of Justice, $2 million of which will be for Smart Gun technology grants. Did you know that there have been recommendations for police officers to have access to Smart Guns owned by citizens? Yes that means that your little chip/bracelet/fingerprints can be overtaken by a band that any law-enforcement official can wear. They also would like to put GPS tracking devices in each Smart Gun. Now why would a gun need a tracking device? Could it be because the government wants to know exactly who owns a gun and where it is located so that they can confiscate at any given moment?

End the freeze on gun violence research. Seriously? End what freeze? You can do research any time you want to. All of the data, statistics, polls, and crime ratings are all there. It just doesn’t match up with his claims against guns, therefore he wants to make uniformed people believe that any of the research that has been released is invalid since apparently there is a freeze on the real research. Give me a break.

Make our schools safer. Ok fine. I’m all for my future children going to a safe school, but his definition of safe and mine are not the same. Being from Texas, I have heard all of the stories about Charles Whitman shooting from the clock tower at the University of Texas in 1966. Did you know that it wasn’t just police officers who fired back? Other armed citizens, both students of UT and locals around the area at the time opened fire. A couple of these citizens even went with the officers into the tower to get to Whitman. With the extra help from these armed citizens, lives of students, faculty, and even police officers were put at a lesser risk. Because of the return fire from multiple directions, Whitman was forced to hide behind a wall to avoid shots which in turn prevented him from having good aim to harm any other people.Taking guns away and providing counseling instead is not going to help make schools any safer.

Lastly, of course he has to enter ObamaCare into his anti-gun plan. Don’t even get me started on that one.

To wrap up my post, why are we going to spend money we don’t have? Our country is already trillions of dollars in debt, yet he wants to spend another billion to take away our Constitutional right? How about we use that money to REMOVE laws that infringe on Americans’ Constitutionally protected right to keep and bear arms instead and be done with it.